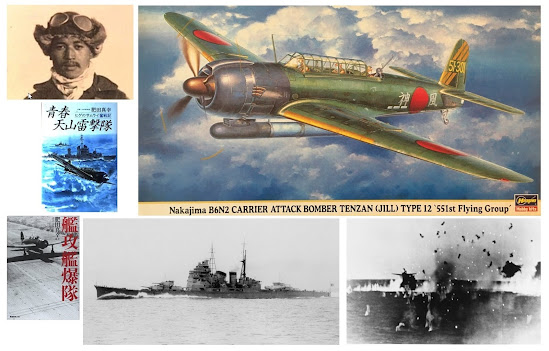 It may seem strange that this "Tenzan" (Jill) bomber of Kōkūtai 551 is related to a Zero. But surprisingly, it is. As I was going through my stash of kits, I looked a little more closely at the career of this Tenzan's unit commanding officer, who would be Lt. Saneyuki Hida. I apologize that the picture of the kit cover with the beautiful boxart of Shigeo Koike is a bit askew, I took it with my cell phone...

Saneyuki Hida (March 21, 1919 - September 12, 2012) was a former Imperial Japanese Navy officer and former maritime self-defense officer born in Kushikino village, Kagoshima Prefecture. He retired in 1975 with the rank of Vice-Admiral.

After he graduated in 1939 from 67th NA class he became Ensign on board of armored cruiser Yakumo and in May 1940 was assigned to the heavy cruiser Atago (on the photo). In November of the same year S. Hida started flying training and after promotion to the rank of Lieutenant junior grade in October 1941 he was assigned to Ômura Kōkūtai month later. At the beginning of 1942 he became instructor at Kasumigaura Kōkūtai.

At the beginning of June 1943 Saneyuki Hida was promoted to the rank on Navy Lieutenant and a month later he was assigned to Kōkūtai 331 at Saeki air base as Buntaichō of unit´s torpedo bombers.  In August this mixed Kōkūtai (24 fighters and 24 bombers) transferred on board of HIJMS Jun´yō to Sabang base at Sumatra.

At the beginning of September his bomber Buntai was transferred to newly formed Kōkūtai 551 and he became Hikōtaichō of the new unit. From the air base Koetaradja (today Kuta Raja) at Sumatra his unit performed sorties in area of Dutch East Indies and Bay of Bengal. At the end of January and early February 1944 Kōkūtai 551 transferred to Truk on board of HIJMS Kai´yō.

After re-organization of the unit Lt. Hida became, in early March 1944, Hikōtaichō of Hikōtai 251 equipped with Tenzan bombers as a part of Kōkūtai 551. His unit suffered serious losses during US Navy raids against Truk. Kōkūtai 551 later took part in Battle of Phillipine Sea and Lt. Hida was one of few survivors who was able to reach Guam after the raid against TF.58 in mid June. In one of his memoir books (see photo of covers) he describes how he asked ground crews to paint quickly the three yellow stripes on the tail of his Tenzan bomber. His Hikōtai was the only torpedo bomber unit that managed to sink a US vessel. Hida´s men were apparently responsible for sinking of 400 ton amphibious assault ship LCI(G)-468 on June 17, 1944. Photo shows one of Kōkūtai 551 Tenzans during attack on April 30, 1944.

Lt. Hida reached Japan via air transport and in early August 1944 he took over command of Hikōtai 162 equipped with 48 Zero Sen fighter bombers as a part of Kōkūtai 601. At that time this Kōkūtai was part of 1st Air Flotilla (Zuikaku and Ryūhō) within 3rd Fleet. Lt. Hida´s Hikōtai was busy with training at Oita base, Japan till November 1944 when unit was disbanded and Lt. Hida became Hikōtaichō of Kōkūtai 601.

At the end of February 1945 he became commander of Hikōtai 254 with Tenzan bombers and took part in night bombing missions during Operation Kikusui.

Lieutenant Saneyuki Hida was transferred to reserves on September 15, 1945.

After difficult post-war years Hida-san joined National Police Reserve in 1954 with the rank of Security Officer 3rd class. Several years later, in July 1958 he started to work at Japan Coast Guard Headquarters with the rank of Seaman 2nd class.

In 1961 the 51st Kōkūtai was formed at Hachinohe Air Base in Aomori Prefecture with six Lockheed P2V-7 Neptune and six Grumman S-2F Tracker aircraft as part of Fleet Air Wing 2 and Saneyuki Hida became first commander. Three years later, on September 1, 1961 he received promotion to the rank of Captain (Ittō kaisa).

After a brief service in another education role, he was promoted to the rank of Vice-Admiral (Kaishō) on December 1st, 1973 and assumed command of Fleet Air Force (JMSDF) until his retirement on July 1st, 1975.

On April 29, 1989 Vice-Admiral (ret) Masayuki Hida was awarded the Order of the Sacred Treasure, Third Class.

After his retirement Vice-Admiral (ret) Hida became advisor of Kawasaki Heavy Industries, Ltd. and as late as 2009 he joined The Nippon Kaigi, Japan’s largest far-right non-governmental organization and lobby.

In 2011 he appeared in a documentary program produced by NHK.

On September 12, 2012 Hida-san died of pneumonia at a hospital in Kanoya, Kagoshima Prefecture at the age of 93.