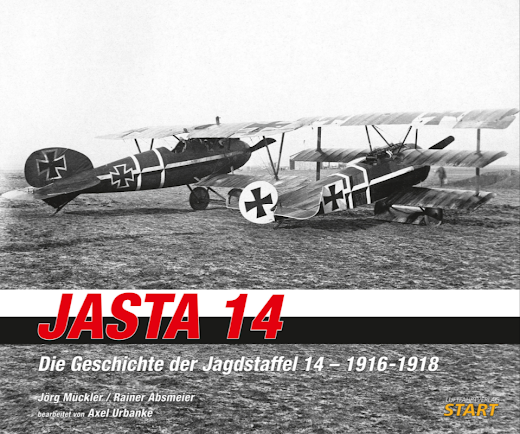 Authors: Rainer Absmeier, Jörg Mückler, Axel Urbanke
Publisher: Luftfahrtverlag-Start
ISBN: 978-3-941437-46-3
Price: 64 EUR
(review originally published in Czech language in REVI magazine Nr. 132)
The German publishing house Luftfahrtverlag-Start, backed by the publicist Axel Urbanke, is best known for its excellent publications focusing on German air, tank and submarine topics from World War II. It therefore came as something of a surprise when Axel announced that he would be publishing a comprehensive publication on the Royal Prussian Jagdstaffel 14.
Basis of the content of the book was prepared by Rainer Absmeier and Jörg Mückler. Axel Urbanke made extensive effort in terms of editing, obtaining further photos and documents and writing parts of text. Jörg Mückler has published extensively on the German Imperial Air Force in the past. The result of several years of work looks impressive. On a format of 24 x 28.5 cm, the reader gets his hands a book with 224 pages in which the history of this unit is depicted in more than 250 photographs and 9 maps. It is published in a quality that is no longer always common for the market segment of books focusing on WWI aviation. The 21 colour illustrations are prepared by Australian artist Juanita Franzi.
Jasta 14 was founded in September 1916 and by the end of the war its members had achieved 58 aerial victories. Among its commanders was the legendary Rudolf Berthold and for the longest time it was led by Lt. d. R. Hans Werner. Future Luftwaffe generals Josef Veltjens, Hasso von Wedel, Eitel-Friedrich Roediger von Manteuffel and Joachim-Friedrich Huth also passed through its ranks. It was gradually armed mainly with various versions of Albatros category D, as well as Fokkers Dr.I and Siemens-Schuckert D.IV fighters. But there is no shortage of less common types of fighter aircraft in the book either.
The text and captions for the illustrations are bilingual, in German and English. The authors describe the unit's activities in detail, including an analysis of aerial combat and details of individual airmen. An extensive subsection is of course devoted to Rudolf Berthold and his successor as commander, Walter Höhndorf.
Of particular interest is the Albatross D.II, photographed in the spring of 1917, without fuselage paint but bears a colour portrait of Kaiser Wilhelm on the side. Unfortunately, it is not known who flew this machine.
From the summer of 1917 there are pictures of Albatross D.III, which is camouflaged with dark spots on the fuselage and on the top of the wings and carries a very carefully rendered skull and crossbones on the side of the fuselage. It is possible that its pilot was Vizefeldwebel Gerbig, and it may have been used for night-flying experiments before assignment to Jasta 14.
Other aircraft that caught my eye include the Albatros D.Va (D.7241/17), which was fatally crashed on 4 June 1918 by Lt. Emmerich Honig. It bears his personal emblem on the fuselage sides - a large five-pointed star, the insignia already done in the form of beam crosses.
The conclusion of the book offers the post-war fates of some of the members of Jasta 14, some of whom I have already mentioned in connection with their later service with the Luftwaffe. Appendices include, among other things, a list of Jasta 14's aviation equipment with documented military registration numbers, a list of 84 pilots known to have served with the unit, and a detailed list of aerial victories and losses.
The book is extremely valuable from both a historical and modeling perspective. The publisher also has modelers in mind, so decal sheets of selected Jasta 14 aircraft in 1/72, 1/48 and 1/32 scale are available on his website www.luftfahrtverlag-start.com There are decals for Albatros D.II, D.III, D.Va and Fokker Dr.I, but the number of decals varies from one sheet to another.
I highly recommend them to anyone interested in Great War aviation history.
Link to the Jasta 14 book website page with samples of book´s pages.